Back to page
View source

The hall of prophecies also includes 6 shelves on either side that can carry the prophecies. The shelves of the Ministry can be flipped down like doors to imitate the falling shelves during the Battle. On Harry's prochecy, there is a small picture of Harry battling Voldemort.

Their is also the Veil room. The main feature of the room is an archway made of gray bricks (imitating stone) and a tattered piece of LEGO cloth hanging from it. There is a lever that can push a minifigure through the viel and onto the other side of the archway.

The Ministry of Magic atrium is the largest room of the set and is designed as a large hallway. The floor is black tiles (with some ground with studs so minifigures can stand). Each side of the chamber has three fireplaces built in, each with levers pushing minifigures backwards to reveal a piece with stickers with green flames. The far end of the atrium is the Fountain of Magical brethren, which has a wizard, witch, goblin, centaur, and house-elf minifigure colored gold. On top of each wall is arched pieces, each with clear pieces inbetween to demonstrate windows. The walls are set to fall out and break to recreate the scene where Voldemort shatters all the windows. There is also a poster of Cornelius Fudge on one side of the wall. 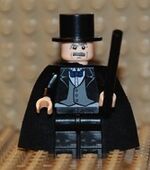