4839 Hogsmeade is a set based on the wizarding village of Hogsmeade from Harry Potter. It includes Honeydukes, The Three Broomsticks pub, The Hog's Head pub, and the Shrieking Shack. It also comes with wand pieces, the Marauder's Map tile piece, and Harry's Invisibility Cloak. It includes 10 minifigures and is based on Hogsmeade's appearance in Harry Potter and the Prisoner of Azkaban.

This set includes four buildings, each with unique features. The roofs of all buildings include snow. There are some special window window pieces with advertisments for the shop.

Honeydukes is larger than it was previously in LEGO and looks more like it does in the video game LEGO Harry Potter: Years 1-4. It includes a lolipop, a chocolate frog, and Bertie Bott's Every Flavor Beans.

The three broomsticks has 3 long tables each with cups and plates on them. There is a counter at the back where Madam Rosmerta serves foaming butterbeer at the bar. There are shelves of goblets and food behind her, and a head with antlers mounted on the walls. A fireplace with light-up bricks is in a far area of the room.

The Hog's Head is a grubby sort of place, and this is represented by grey and brown bricks. There is has a goat and tables with brown and black goblets. A sign outside says "The Hog's Head" with a picture of a decapitated hog head.

The Shrieking Shack is made of brown and white pieces and boarded up. There are secret passageways, spiderwebs, a bed, and a piano. The floors have stickers of wood on them and a stairway to the bottom (leading to the Whomping Willow exit).

Harry and Ron's minifigures are the same as they are in 4758 Hogwarts Express, but Hermione's is new and unique to this set. Draco Malfoy appears in the same black sweater as he does in 4719 Quality Quidditch Supplies but with his new flesh-colored head and hands and new hairpiece. Madam Rosmerta is also unique to this set, and the dementor is its 2010 redesign. 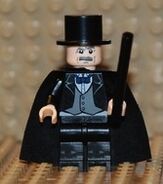 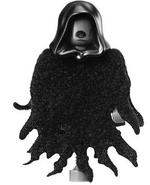