Custom Lego Wiki
Register
Don't have an account?
Sign In
Advertisement
in: Pirates of the Caribean, Custom Sets

6235 Tortuga is a set part of the Pirates of the Caribean theme. It is based on the Curse of the Black Pearl. It includes 6 minifigures. It also includes a graveyard, a pig pen, and a bar.

This set includes a bar, a pig pen, and a graveyard. The bar has a wall on one side and on the other you can play inside. The bar has two tables and a bar that a counter can go behind. There is some bottles of rum. There is also a door and a trapdoor with a ladder to the attic. In the attic, there is some spare rum, some ship-in-a-bottles, and a chest with treasure. There is a small fireplace. It has around 400 pieces.

The graveyard has a large gate that wraps around a 20x18 base plate. The gate has a key and chain and the chain is so tight that the gate can't be opened unless it is removed. There is four graves, and each have different names on them. There is some skeleton parts in the place. It is around 100 pieces.

The pig pen is pretty small, and all it has is a small wall, a brown base plate to represent mud, a pig, and a cauldron that can be lifted up to throw "water" (blue 1x1 circular pieces ) onto Gibbs. It has around 60 pieces.\

Jack Sparrow is included in a set once again. He hais his brown jacket, his sword, his compass, and his tricorne. He also has the double-side head again.

Will Turner is includes in this set again. He has the brown hairpiece and his mustache. He has the double-side head again, the white jacket, and the scabbard. He has a sword as a weapon.

Joshamee Gibbs appears in a set for the third time. He has a double-side head again, except this time it is happy or sleeping. He has the grayish blue coat again, and has no weapon.

This is the only set that Anamaria comes in. She has a dark brown hairpiece. She is black, and her double-expression is happy and furious. She has a white outfit and olive green pants. She has a sword as a weapon. She is exclusive to this set.

Scarlette is exclusive to this set. She has the same hairpiece as Willie Scott except without the crown and it's scarlet. She has a scarlet dress. She has no double-side head. Her only expression is proud. Her and Scarlette have very similar faces so they can be switched.

Giselle is exlusive to this set, too. She has the same hairpiece as Princess Lea (Slave), except it is blond. She has a yellow dress. She has no double-side head either, and her only expression is annoyed. Her and Scarlette have very similar faces so they can be switched. 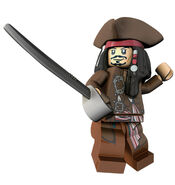 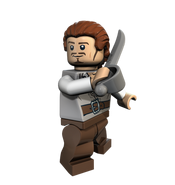 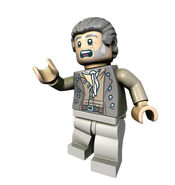 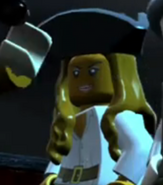 The poster that comes with this set has Joshamee sleeping in the pig pen, Scarlette is walking out of the bar, and Giselle is in front of the gate to the graveyard. Jack Sparrow is walking to Joshammee Gibbs, and Will is walking in between the bar and the graveyard.