BrickArms is an online supplier of custom elements owned by Will Chapman.

A long time Adult Fan of LEGO (AFOL) and trainhead, Will was asked by his young son about WWII-era weaponry for his minifigs. The quest to fulfil his son's request spawned a business that is now arguably the largest arms supplier in the LEGO world. 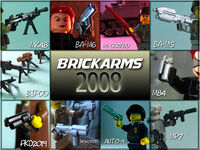 BrickArms specialises in producing small arms, grenades, band minifigures based on historical and current designs. Weapons are designed with CAD-type software, and manufactured in the same manner as LEGO elements using ABS in injection molding machines.

Various weapons have produced such as the German potato masher (M24 Steilhandgranate) and the Broomhandle Mauser(C96), as well as the M1 Garand rifle. In 2007, BrickArms introduced custom minifigs using weapons and specially created to create German and American infantry of varying ranks and their weapons.

One of the weapons in the two original molds was based on the M41A 'Xeno' Pulse Rifle from the movie Aliens. A custom Colonial Marine figure was one of the first to its products in different colors, (Gunmetal, Silver, Dark gray) However, Series 1,2,& 3 are not available in these colors, except for the silenced PPKs (Because "They look so cool")

The newest 10 BrickArms weapons and weapons accessories for 2008.

Certain items on the Brickarms site have been made unavailable due to reasons beyond Will's control. These items include...

Brickarms has two authorized resellers. The first, minifigforlife.com, sells Brickarms to people in the U.K. and Europe. The second, toywiz, sells to people in U.S. The third, Warehouse19, sells to sweden and the netherlands.

Recently, BrickArms has come under criticism from several muslim groups over the design of one its products, on the grounds that it (the 'Bandit' minifigure) greatly resembles the stereotypical Al-Quaeda soldier, and that the design was distasteful. However BrickArms has continued production of the Bandit Minifigure, and has not made any statements over withdrawing the figure from its online store. Soon, there will also be an Australian reseller as well

With the steady growth of BrickArms customers and fans, Will created a subsection on the main BrickArms site in September 2007, the BrickArms Forums. There are currently around 900 registered users as of 29 March 2008.

By far one of the most popular subsections on the forums, users share their creations that feature various BrickArms products, ranging from various ficitional armed forces, Halo-inspired vigs/MOCs to the ever-popular Grunts webcomic by Doctor Sinister, a parody of military life amongst a contingment of minifig soldiers.

BrickArms encourages patrons to modify their purchases to create original designs or variants of the original weapons, and has provided a section where users can present their work and offer tips to other users who may be interested in reproducing them.

Another much-frequented subsection of the forums, users submit and discuss suggestions for future items they'd like BrickArms to offer, ranging from increasing the WWII and Modern-era ranges to more bizzare ones like Molotov Cocktails, baseball bats (seen at Brickworld) and crowbars.

To help foster creativity in the use of BrickArms products, the forums staff hold various competitions from time to time, with special edition products or pre-production prototypes as prizes. So far there has been a riddle contest to guess the names of the items now released as Series 3 items and three themed vignette competitions, one on Blade Runner, the second on Halo, and a third on Indiana Jones. Also a spy minifg contest.