This set is in the Pirates of the Caribbean theme. It is a medium size set that costs $45. It will have 5 minifigures: Elizabeth Swann (Trader), Pintel, Ragettie, Maccus and Hadras. It will be a beach with a long boat that has Jack's jar, Davy Jone's heart, and the Dead Man's Chest.

The beach will be a medium size tan plate with 2 palm trees. It wil also have a clam and crab. The longboat will be light brown with tan seats like in the Isla de Muerta set.

Elizabeth (Trader): Elizabeth Swann in her pirate gear from dead man's chest. She has a tanish vest with white arms and a combined hair and hat. her pants are brown. Her accessories are two swords. Her face is dual sided with a happy face and a dissaproving frown on the other side

Ragettie: He has the side-combed hair in yellow. his head is double sided, one side he has his wooden eye in the other side he doesnt. His jacket is grey and he has a violate-red shirt under it. He comes with a ball with a eye on it resembling his wooden eye.

Pintel: Pintels face has a black beard and his torso is an open jacket. He comes with a pistol and sword.

Maccus: Maccus has a grey head with a dissaproving face. He has a a grey, scaly, coral covered body and brown pants. His hat/head is in the shape of a hammer head's head

Hadras: Hadras is a green color. He looks hust like in the set "The Mill" but this time his head is dual sided. One side normal and the other side looks like a hermit crab. 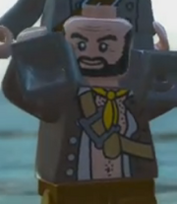 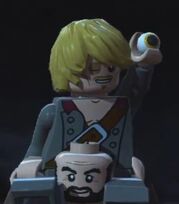 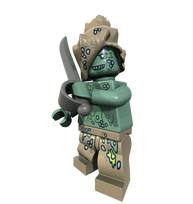 Hadras
Add a photo to this gallery

Jar of Dirt
Add a photo to this gallery

Elizabeth is passing a sword over to Ragettie while blocking Maccus. Pintel is aiming his gun as if he shot off Hadrass' head. Hadrass' body is walking around to find his head which is on the floor. ﻿

Retrieved from "https://lego-customs.fandom.com/wiki/Isla_Cruces?oldid=6815"
Community content is available under CC-BY-SA unless otherwise noted.