Percy Weasley is a minifigure in the set 7295 Ministry Work Desk. He is exclusive to this set.

Percy Weasley is the third eldest child in the Weasley family. He is the most serious, and grew up to be a prefect and Head Boy. He takes his job as prefect very seriously, and even takes points from his own brothers.

In 1994, Percy left Hogwarts and joined the Ministry of Magic. He was an assistant to Barty Crouch Sr, and had to write a report on cauldron thickness for him. After the attack at the Quidditch World Cup, he contsantly was getting howlers sent to his office. He was a replacement judge for Barty in the second and third tasks of the Tri-Wizard Tournament.

A year later, when Voldemort came back and the Weasleys were going to Grimmauld Place for the Order of the Pheonix, Percy got angry at his family for believing the Voldemort "nonsense" and that Dumbledore is a liar and Cornelius Fudge is right about Harry being a liar and Voldemort is dead. He left his family and went to the Ministry of Magic. He rarely saw his family, and when Molly Weasley sent him Christmas presents he sent them back. He saw his family the next year when Rufus Scrimegar went to the Burrow to see Harry Potter.

In 1998, Percy went back to his family to help them fight in the Battle of Hogwarts. He was sorry for everything he did, and asked for them to forgive him. The family forgave him and he fought alongside them during the battle. When Fred died, Percy was as devastated as the rest of the family. His fate after the battle is unknown.

Percy has the same hairpiece as Professor Lupin. He has the same head as the 2006 Luke Skywalker, and has the same torso and legs as Neville Longbottom. He has a wand and a gray paper that is a report for the minisrty. This is more of a prototype minifigure, because he doesn't have white-dotted eyes and he is less detailed. 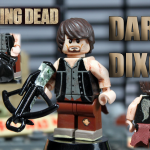