The set will be like The Burrow set because it will have the back walls missing so you can see the rooms. One half (left) will have 2 rooms. From top to bottom: Elizabeth's Bedroom and the doorway.

Elizabeth's Bedroom: In the bedroom, there will be a large bed. It is a basic, plain room. There will also be a portrait of the governor. It will be a square flat piece with a sticker of the portrait of him.

Doorway: The doorway will have steps leading down from Elizabeth's room. On the top is a lamp hanging onto a very short chain. There is a window that stretches to the left side. There is a small window next to it.

On the right, there are 2 more rooms: The library and the dining room.

Library: The Library will have a window and book shelves filled with books. There will be a chair and desk to read at with a candle on it. There will also be a couch.

Dining room: The dining room will have a very long table, It will have lots of chairs, plates and glasses. The plates will be filled with food (Chicken, tortilla, cherries, fish and apples). It will have a big square window. There is a corner of the room with a small kitchen. It has a pot hanging over fire and a light brick. there is also a sink with plates in it.

Elizabeth Swann (Night Gown): Elizabeth in a white night gown. She has a happy and scared face this time. Her accessory is a frying pan.

Govorner Weatherby Swann: He has a wrinkly face and a grey hair the same as Elizabeth, but combined with a tricorn hat that has a white printing on the top edge.

Pintel: Pintel has a grey open jacket and a white bandana on his neck. He has a scragly black beard and brown pants. He has a pistol.

Ragettie: Ragettie has a comb-over blonde hair. He has a doubble sided head one with a wooden eye in one with it not in. He comes with a sword and a wooden eye.

Maid: The maid does not resemble the one from the film. She has a tanish dress with a white one under it. She has a bonnet combined with a black hair. She comes with a broom. 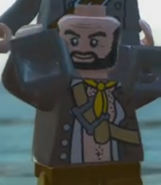 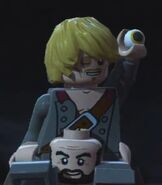 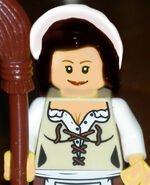 Maid
Add a photo to this gallery

The poster shows the Black Pearl in the backround through a window shooting at Port Royal. Elizabeth is smacking Ragettie with a frying pan. In the doorway the chandelier is falling down. Weatherby Swann is yelling as the chandelier is barely missing him. The maid is hitting Pintel, who has taken the medallion, on the head with a broom.﻿

Retrieved from "https://lego-customs.fandom.com/wiki/The_Governor%27s_Mansion?oldid=6519"
Community content is available under CC-BY-SA unless otherwise noted.